There are four major halls on two floors, connected by an enormous crystal staircase at the center.

Entered through the Privy Garden (Has Bahçe), the large Protocol Hall (Medhal Salonu) on the first floor impresses visitors with its splendid decorations. Among many fine decorations of the hall is the huge Baccarat crystal chandelier,  English candleholders, and vases made in Sèvres also decorate the hall. There are also four ceramic fireplaces, one in every corner, above which sits crystal pieces. These crystal pieces reflect different lights and colors every hour of the day. This magnificent hall is actually a waiting room where visitors used to wait before their meetings. 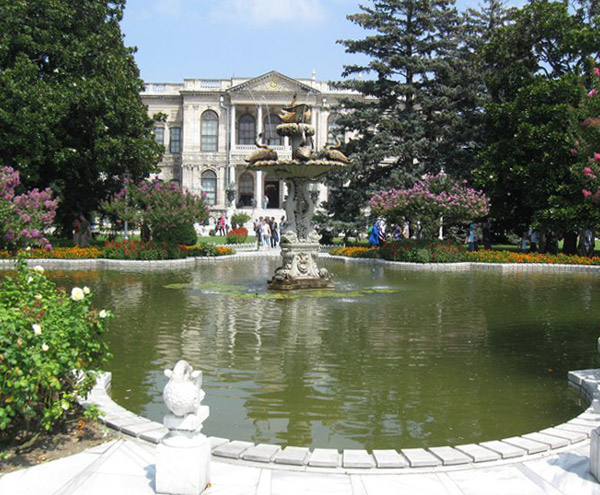 Next to the Protocol (Medhal) Hall on the side of Bosphorus is another impressive hall, called the Tiled Hall (Çinili Salon). Also called the Clerk’s Hall, it houses the largest painting (3m x 5.2m) in the palace, the “Sürre Alayı”, painted in 1873 by Stefano Ussi, an Italian orientalist. It illustrates the people travelling to Mecca to bring financial aid and imperial gifts (Sürre-i Hümâyûn) to the people of Mecca and to maintain the Mausoleum of Hz Muhammad there. This painting was the gift of İsmail Pasha, the governor of Egypt, to Sultan Abdülaziz. İsmail Pasha met Ussi at the opening of the Suez Canal in 1869, and commissioned him to make this painting.

The Men's Mounting Chamber (Mâbeyn Binek Salonu), which has exits to both the seaside and the street side, was used for daily business. Its interior decoration is in harmony with the Medhal Salonu. The tall mirrors with gold color frames placed next to the doors were for the officers to check their appearances before entering the Sultan’s room. The room also houses Baccarat crystals, European furniture, large vases and Hereke rugs.

A monumental crystal staircase at the center, connecting to the second floor occupied by the highest administrators of the empire is called the “Imperial Staircase”. The European Baroque staircase, designed by Nigoğos Balyan and opulently decorated by French Séchan, also reflects the traditional Ottoman style. The symmetrical and elegant decoration of the halls surrounding the staircase is breathtaking.

Ambassadors Hall (Süfera Salonu) and the room connected to it were used for international meetings with the ambassadors and foreign diplomats. It is designed and decorated in a perfectly symmetrical way. The hall, sharing the same design with the Medhal Hall, houses the second largest chandelier of the palace. Its tall doors, mirrors and high fireplaces are in a perfect harmony. The ceilings are delicately ornamented. The assistants of the ambassadors and foreign diplomats waited here, while their superiors were in meetings in one of these rooms.

The Red Room was used by the Sultans to receive ambassadors. The room is named after the dominating red color of the curtains, the color of power. The gold-colored draperies and the red and gold colored furniture together with the table in the center produce a very powerful effect. No walls were built in the room. The columns, hidden behind the curtains, are connected by large windows with the Bosphorus view, so that the room is cleverly decorated with the real view of Istanbul.

The Zülvecheyn Salonu (Two-fronted Hall) on the second floor faces both the Bosphorus and the street side. It is situated in the entrance of the Sultan’s private suite and next to the Harem section. The hall, used for wedding and religious ceremonies, was the only place in the palace where the women were allowed to be outside the Harem. Sultan’s private suite includes many rooms. Caliph Abdülmecid Library houses many rare books in both Ottoman and foreign languages. The imperial bath complex (Hamam) consists of three interconnected rooms with different temperatures. The warmest room is situated at the end. The Hamam, heated from the floor, is lit by daylight through the steel-framed glass ceiling. The walls are made of the translucent Alabaster brought from Egypt and the floor is covered by Marmara marble. There are also lavishly decorated study and prayer rooms in the private suite.

Visitor Information:
Hours: They are from 09:00 am to 16:00 pm every day, except Monday and Thursday.
Rules: If there are signs, such as clearly prohibiting the use of flashes to protect the artwork, please, follow the rules.