The large mosques built by the imperial family were called “selâtin cami”, meaning imperial mosque, which are located in the three Ottoman capitals, Bursa, Edirne and Istanbul. They are the equivalent of cathedrals in Christianity. If it was built by the vizier or any state dignitary, it is simply called “cami” (mosque), which are smaller than an imperial mosque. The size of the mosque is defined by the estimated number of the congregation on the Friday prayers. Very small mosques are called “mescid”, where Friday services are not permitted.

Ottoman architects mastered building vast inner spaces. In order to open up the interior, the ottoman architecture eliminated as many of the columns in the nave as possible, so that, all parts of the prayer hall became visible. Moreover, in the classical imperial mosques, the galleries against the sidewalls are reduced to narrow balconies. Sometimes, this opening up is done even further by adding extra semi-domes to the north and south.

A further innovation of the imperial mosque was their monumental exteriors. They are in attractive grey stone and with a cascade of domes and semi-domes, balanced by the attractive upward force of minarets. This was in comparison to Hagia Sophia, where the nave and the side aisles were divided by colonnades and the exterior is in brick.

Another feature of the classical Ottoman mosques is the polygonal plan (commonly Octagon or hexagon) erected in a square or rectangular area, covered by a dome. There are no central columns or wide side galleries, and even the dome supports are pushed back as close to the walls as possible. The prayer hall rarely has furniture; chairs and pews are generally absent from the prayer hall. Almost every imperial mosque has Islamic calligraphy and Koranic verses on the walls. Congregants pray in rows, parallel to the qibla wall and thus arrange themselves so they face Mecca. The areas of prayer for men and women are separate. In the central area, only men are allowed to pray, while women take their places either behind them or in the galleries.

Smaller ottoman mosques have a single minaret, which is mostly on the right side of the entrance. The great imperial mosques may have two, four, even six minarets, rising from the corners of the building and the courtyard. Minarets have şerefes, balconies from which a Müezzin gives the call to prayer.

All types of mosques are proceeded by a porch of domed bays. The greater mosques always have a monumental courtyard, calledavlu. When the mosque is full, the late comers perform their prayers in the courtyard. An eyvan (iwan) is a large vaulted hall, closed on three sides and open to a court on the fourth.

The stone platform on the side of the mosque in the courtyard is called musallat taşı, which is the place on which the funeral box is placed, and the congregation pays their last respect and performs their prayer to the deceased.

In the center of the courtyard, there is usually a Şadırvan (monumental fountain). Şadırvan is a typical Ottoman fountain, built in the middle of the courtyard of the mosques, or in the entrance of the caravanserais and medreses. They provide water for drinking or ritual ablutions (abdest, a ritual washing before praying). In addition to providing people with water, fountains serve also as decorations and sound elements.

The interior design of all mosques are mainly the same. 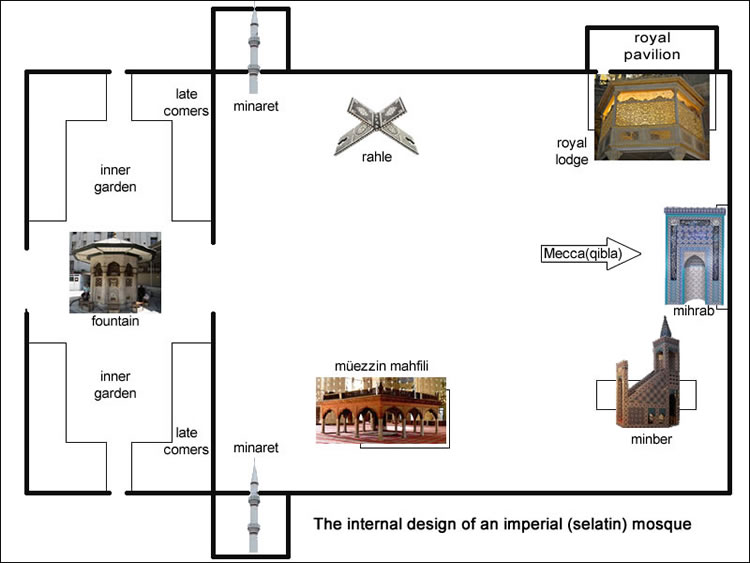 Mihrab: The most important element is the Mihrab, which is a niche. It does not have any furniture, and it is set into the center of the qibla wall, (Kıble), the direction of Mecca, toward which the faithful must face when they pray salah. In Turkey, that is southeast. It is a characteristic of classical Turkish mosques that even on the most crowded days, the majority of the congregation can easily see the mihrab.

Minber: To the side of the mihrab is the minber (pulpit), where the imam (preacher) gives the weekly sermon on Fridays or reads the Kuran (Quran). In imperial mosques, the minber is decorated with marble and ceramic tiles.

Müezzin Mahfili: Opposite the minber is the müezzin mahfili, which is a special raised platform in a mosque, where a Müezzin chants in response to the imam's prayers.

Hünkar Mahfili: The imperial mosques always have a hünkar mahfili (imperial lodge), a chamber reserved for the sultans only and screened off by a gilded grill. It is usually in the far left corner of the prayer hall.

Rahle is a reading desk in mosques, used for only religious books.

Islam requires all Muslims to pray five times a day. When the believers hear the call to prayer from the minarets, they perform their ablutions (washing) and then pray. The noon prayer on Fridays and the prayers on other important holidays are performed in the mosques, but other prayers can be performed anywhere.